I always wanted to be a mom. I didn’t dream of weddings or anything else as a young girl. I was lucky enough to meet my husband in the most amazing of places: while we were in training with the navy. Before we were even engaged we talked about how many kids we would have. Them it got hard. We were stationed apart and were left with no choice but to marry one weekend without family or friends present.

It was nearly 5minths after being married that we were able to live together for the first time and we decided to try for a baby right away. Sadly I suffered a loss at nearly 18weeks. The naval hospital tried to convince me nothing was wrong and sent me away. I went to a “civilian” hospital right away and ended up having a d/c. I was devastated. My command was less than supportive. So it was back to military work for both of us.

I suffered a severe depression I can only recognize now. Them a few months later I discovered we were expecting again. I tried to be happy but I was terrified. The military has terrible prenatal care and I never enjoyed that pregnancy. My command was again less than supportive and when I was about 20 weeks along they started the unnecessary abuse. They told me I got pregnant on purpose to jeopardize my commands mission. I would never do that. I even I tended to deploy shortly after the birth. Those guys had my back and I had theirs, but my Commanding Officers kept on.

Every day I suffered to enjoy being pregnant with my daughter and came into my job and took yelling telling me that this was not a gift but something I did to hurt others. They had me transferred two weeks later. This ridiculous reputation preceded me and I arrived at a new command where I was instantly treated terrible as though I got pregnant to get out of my navy work. I was an air traffic controller and they quickly found I was one of the best. But at 26 weeks I went into preterm labor. My daughter was born at 33 weeks and almost didn’t make it. She stayed in the hospital for more than a month and I, determined to win the support of my command hardly visited her. I was not happy. We brought her home on mothers day. It meant nothing to me. My whole pregnancy I was told she was a mistake and I was terrified to connect so I wouldn’t suffer another loss.

We continued our military work and we found out my husband was going to be deployed for a year. A week later I found out at my check up for my IUD that it wasn’t placed correctly and I was pregnant again. My daughter was 6months old. Again started the abuse at work. Again I felt sorry I got pregnant instead of happy. I took yelling and abuse. And now my husband was deployed. I was alone. Somehow I made it and I had him at 38week. Now I was alone in the military with a 13 month old and a new born.

When my son was 5 mo the old I was basically kicked out of the navy. My command said I was hurting their mission (because after 20weeks prego I couldn’t control aircraft) and now I was on depression meds. My doctor was amazing and basically told me that it was best for my health to get out and so I was honorably discharged before my husband got back. Two years later I was diagnosed with PTSD. It is hard. I have no memories of the first two years of my daughters life. My mind has blocked them. I have no memories of the time during my husbands deployment (including the birth of my son). But my story isn’t over yet.

My husband got out of the military right after my son turned one. mostly so I wouldn’t have to be alone any more. And for that I owe him my life. Literally. So we moved to Colorado and I got a great job as an assistant to the owner of a medical spa. But not even a year into it I discovered my boss was going to fire me. Not for anything I had done. The girl who held the position before me was bubbly and cute and while I have always been kind to everyone, I am serious. She never gave me a fair chance and never like me the way she like the girl who left before me. I did my job well and saved her company tons of money. I showed up early every day and did exactly as she asked and more. She told me the day she fired me that I couldn’t be trusted (though I took her deposit to the bank almost daily and controlled 100% of her inventory). She told me that my resume was a lie and that she should have never hired me. Back came all of those feelings I had worked for two years to get over. Someone was again tying to make me guilty for something I had not done. That was February of this year.

I got 200 times worse after that. Now I have more anxiety problems, anger issues and a ton of other symptoms since then including letting food be my comfort at times. So I decided to stay home. I enjoy my kids, though my memories of them being babies are gone. I love them and play with them and stay away from the world that always finds a way to hurt me. Now I look in the mirror and see my post pregnancy body (though in my reality and my memory I never had a baby) and I hate the way I look. I was in perfect shape. In a difficult military command where I could do as much as the men. I see me now four dress sizes bigger and ravaged by eating problems, medications and depression. But I am determined that next year will be better and I can start to heal. I will love my kids and as hard as it is I will try to love myself. So now I am here with two amazing children, but I still feel as though I was only pregnant with my first. It still feels like I never got my wish to be happy and pregnant and have babies. And now I dont have my dream military job either. I just recently started staying home with my kids. I long for a connection with them. It is hard though. And now I look in the mirror and see my post pregnancy body, ravaged my medications and eating problems and depression and I don’t even recognize myself.

My journey to being a mom has left me four dress sizes bigger and with a broken mind. When I am out I wish people could look at me and see my story. Maybe then they would not think “look at the over weight lady” or wonder “why doesn’t she have a job?”. So I guess I am sharing with you since I cannot scream it at the world.

Thanks for your time!
Kara
Mom of 4yr old girl, 3yr old boy and one angel.

First picture is right before my first pregnancy, second is me and my daughter, third was today. 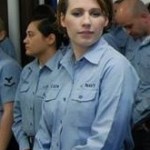 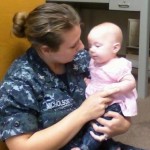 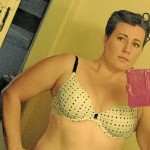 Next post: SOAM Featured in a Story about Belly Love

Previous post: A hole in my heart so big it could swallow an ocean. (Autumn)