Do I look pregnant? (Anonymous)

Hi Im really confused at this point and just want some honest opinions. I believe in “intuition” so somebody go there if you will. :)

Im a mother of 3..I had a tubal ligation in 1997 and I became pregnant again in 1999, it was ectopic and ended in surgery. I have not been worried about being pregnant again until now..I was told I had a cyst on my ovaries a few times..some very small ones but they cant ever really be sure if it was a permanent cyst or due to ovulation because both images were taken a few days before my cycle. Other than that I dont have any known conditions.

My question today is do I look pregnant or do you think I have something else causing great swelling. My stomach has continually grown over the last few months. I have taken several pics just to monitor it all but Im about to go crazy:) No positive urine test, although I had a very faint line one time I also had some opk tests which I used recently over a period of 3 days and all gave a line which I am told can sometimes detect hcg, I had an ultrasound earlier this month, it was the fastest one I ever had so I cant be positive she didnt miss anything but its said nothing was seen. The doctor noted my uterine lining was thicker than normal but could of been due to my cycle coming. I have not missed any cycles they have shortened and been less though. I have all other pregnancy symptoms such as bigger breast, heart burn, movement (quickening), cravings, tired and urinated like crazy (a few months ago), my hips have spread, and most of all I got a growing abdomen and a “crooked” darkened linea negra?

I would conclude this all in my head if only there was no movement, and no growing abdomen..So please anyone take a look and all ideas are welcome. The first pic is today 6/21/2010 The second pic is a combination of how my stomach looked in november 09 or so and 5/2010, and the last one is a few days ago 6/17. If anyone feels I am pregnant Im interested in why or how far u think ect? 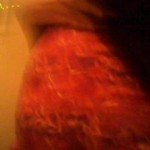 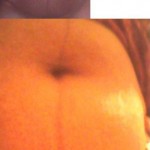 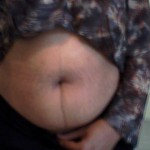