Trying to Accept It (Anonymous)

~Age: 25
~Number of pregnancies and births: 3 pregnancies
~The age of your children, or how far postpartum you are: 3 children…2 1/2 months post partum

Honestly, if I knew what my body would look like after having kids, I never would have had any. I had my first when I was 18. For some reason I thought I was fat and disgusting. I hated my body. And then I got pregnant…and ballooned 50 pounds. It took 2 years to drop 40 of those pounds. I was so miserable with myself for so long I stayed out of pictures as much as I could. By the time my second baby came around I had gained 20 pounds on my own thanks to a husband who encouraged me to eat whatever made me happy. I only gained 25 pounds this time, but it still put me up to the same weight as with my first. Then it was only a year later when I became pregnant with my third child. I had just started to really work at losing the weight and had managed about 5 pounds when I found out. I gained 40 pounds, putting me at my highest weight of my entire life. Before kids I was a size 9. My waist was 31″…30″ on a good day, and I was 150-155 pounds. By the end of my third pregnancy I was 220. After the first week or so I dropped 20 pounds and was in a size 16.

I know it’s only been 2 1/2 months, plus I’m breastfeeding so I can’t do any major dieting, and with three kids, there’s only so much time for exercise, but I just can’t stand myself. There are times when I look in the mirror and I just want to cry. I figure if I can get to 160, it’ll be a happy healthy weight. Although I’d like to be 150 again…I’m not a teenager anymore and I do realize it’s probably not a realistic goal…I could barely maintain that weight back then. Regardless, I just hate myself. There have been times when I take all the mirrors down so I don’t have to look at myself. I have two little girls and I know I need to have a better self esteem so they’re not troubled by the same body issues as I am, but it’s so hard. I try to accept my new body, and work as best I can to improve it. And my husband tells me I’m beautiful and sexy. But I don’t believe him. I can’t believe him. All I see is fat, sagging, and cellulite. 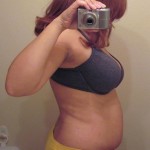 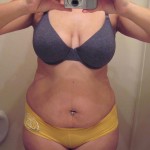