Young Mother of One (Anonymous)

I got pregnant at 19, after being with my Husband for 2 months (this was before we got married). I was very depressed my first tri because I wasn’t ready to have a child, especially with someone I hardly knew. I came around in my second tri, after feeling a fetus move inside of you it’s just so magical you can’t help but fall in love. When I was 5 months pregnant my husband and I got married, a month before he left for basic training in the Army. I’m 5’1″ and I have an extremely short torso, so I always looked a month or two more pregnant than I was, everyone would joke that I was carrying twins. My daughter’s due date came and went, and a week after she was due I was induced (pitocin will forever be my enemy). My OB suggested an epidural at only 2cm (after they broke my water), which I knew you weren’t supposed to do until 4cm, but I thought she would know best and 20 hours later, after screaming and puking and crying, still stuck at 6cm, I had to get an emergency cesarean. The cesarean was the last thing I wanted, but after 27 hours of labor, it was a relief. My husband couldn’t be there, so I had my mom, step-mom, and cousin there for support.

Once I heard her cry, I began balling and she looked just like her daddy. She was 8lb, 7oz, 21 inches long. I had to spend 4 days in the hospital, I will never forget the awful recovery of a C-section. I struggled with breastfeeding and the pain of the incision, as well as realizing I had to take care of a little person 24/7! I never realized what my mother did for me until I had a child of my own….being a mom is the hardest job on the planet!!! My husband didn’t come home until she was 3 months old, and honestly I thought it would be more magical than it was. He held her, and she cried. He assumed it was because of him but she was just hungry….He wasn’t as excited to see her as I had imagined…He told me when he came home he would be the only one taking care of her for weeks, but that never happened. Being a single, married mother….that’s something that really kills me.

We now live on base, and I still do everything. I found out he was cheating on me not 2 months after moving here, thousands of miles away from my family and friends…but I’m still with him, and I’m trying to make it work. We are in marital counseling and he knows if he messes up again I’m leaving him for good. He is very supportive though, he loves my body and tells me I’m beautiful and that it was for a good purpose. I’ve been struggling with my body image a lot, I feel like a flabby old woman. I thought my body was awful before pregnancy, and now I would give anything to have it back. It’s hard to accept myself, I know it was for a good purpose, to bring my healthy baby girl into this world…but I struggle with it everyday. After what my husband did, with those younger girls who haven’t had children….it makes me so insecure. The women I know that have had children look great and it’s really discouraging. I really want to accept my body, but I believe it will take a long time. I can’t wear any of my clothes without looking awful, I can’t wear jeans or my tummy makes a little shelf, my tummy is deflated and saggy, and my boobs look the same. Hopefully I will find the light and come back posting that I have learned to love my body, and I really hope I do. 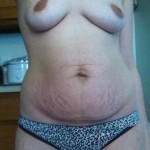 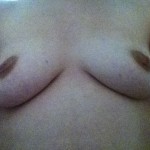 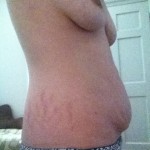 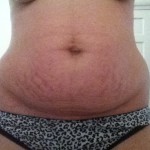