The Shape of a Great-Grandmother (Dora, interviewed by Holly)

Saturday morning. Bath day. Clothes gently stripped and placed aside, laundry for another day. I grip her elbow and guide her slowly into the shower, and onto her seat. And for the first time I truly see the woman before me. She is old, to be sure. But she also has young eyes. She sees everything fresh, grasping memories alongside fresh experiences, comparing, contrasting, learning, teaching.

Today she is teaching me about the wonders of the human body. She doesn’t know that she is doing this, but I learn much as I slowly cover her in soft and gentle suds. Her skin is papery, almost feathery. It lies in folds everywhere, on her arms and legs, her back, belly, breasts, neck. She is like the baggy little puppy, except she won’t be growing into her skin.

I notice two light lines tracing from her belly button to her pubic bone. I ask after them in passing, trying to make conversation during an experience that could be awkward if we let it become that. She points to each in passing, and tells me their stories. The one most left gave her a daughter, her second, born after a long and difficult pregnancy. She couldn’t tell me what was wrong with her by name, but by symptom it sounds like pre-eclempsia. She remembers a nurse caressing her brow and telling her that when she woke she’d have a baby. She tells me of waking up three days later, to pain in her breasts and pain in her belly, and staring at its deflated state and wondering wildly where her baby could be.

She was brought her baby, a pink little sprite asleep and swaddled in blankets. She wouldn’t take the breast, and so the doctor gave Dora medicine to stop the flow of milk. Not even a few days to try. Just emptiness.

She stares into space a moment, lost in reflection over her youngest daughter’s life and death. I continue to soap and scrub, wash and rinse, and watch her closely. After a moment, she surfaces again and tries to resume conversation. Where were we? Oh, yes. That scar, she points matter-of-factly at the scar on the right side. From a surgery a decade after her daughter’s birth, to remove scar tissue from the c-section. A surgery that almost killed her. Too much anesthesia. She shudders a bit. This must be painful.

I change the subject to save her from further reflections. How did she adjust to her body? Did she love her body? She waives the thoughts away. She’s never thought about it that much. It’s just a body. She feels old, she says. And before, when she was young, she wouldn’t look at her body. It wasn’t talked about, wasn’t proper. She kept her body covered, shown only to her husband, who she says loved her and her body fiercely. She smiles at that thought.

I tell her about the world today. Women having surgery to remove loose belly skin, tightening and “fixing” the marks that children give them. Trying to look perfect. Bah, she says. Would she have had that surgery to fix her loose belly? Maybe, she says. Maybe, but what good would it have done? She’d still be here now: An old woman, saggy, wrinkled, and no longer new of body. Although, she doesn’t see what I see. A woman who is wise, surrounded by love and loss, strong for the inclusion of all of it, marked by a life well-lived, but at precious peace now because of that journey.

She smiles as I wrap her in a warm towel. Where were we? Oh yes, she says, I loved my babies and that’s all that mattered then, and all that matters now. 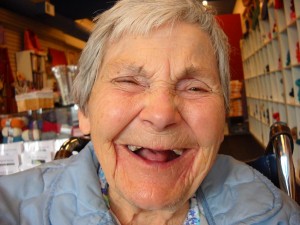