Still Struggling, but Starting to Accept It (Autumn)

Hi My name Autumn and This is my Second Post, Its been Alil over 2 years since I last posted. Theres alot to update on My last post was in October 2010, I was 8 months pp with my first son, A month later in Nov 2010 I found out I was pregnant with my second son. They both were VIA c-Section, Hunter was 9’5 Kaige was 8’8 So I had big babies. Since My last post iv been through a birth of a second son, Weight up and down, Loosing our house on christmas day, and Moving back in with my mom, Loosing jobs and Getting new ones, I will admit i dont feel as bad as I did in my last post About my body, I know It created life and that My Man is not going anywhere, Hes been there for me through thick and Thin and was there for both the boys birth and is there and is such a good father. I gave birth to my second son In auguest 2011 So as of right now I am 21 months PP with my Second Son, Since the birth Of my second son I have Lost About 50 something pounds and now am down to 124 pounds, I was 108 when i got pregnant with my first one. But my body still isnt in pre baby shape. I just wish i didnt have the pooch because it hangs over my c section, I think its because I had big babies and Had a c section. Thanks for listening.

The pictures are me 21 months pp 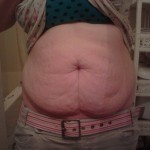 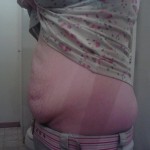