On How I Bought My Baby (Elizabeth)

I’m just going to come right out and say it.

I was a hot piece of ass.

Of course I didn’t see it then, but boy, do I see it now.

I would give my first born to have the body of 19 year old me again.

He barks too much anyways.

When I got pregnant with Samantha I didn’t gain more than 6 pounds in the first 4.5 months. I still comfortably wore all my regular clothes.

Do you hate me now?

Sure, things changed some. Almost immediately there was some shifting. But nothing too drastic. I wasn’t working out. After losing my job [because I was pregnant, in not so many words. True story.] I really wasn’t doing much of anything. Except for eating whatever I wanted. When it came to food, I pulled the pregnant card more than what would be acceptable from Michelle Duggar. I survived solely on Olive Garden, Taco Bell, Taormina’s Pizza [it’s a Detroit thing, you wouldn’t understand], Cold Stone or Ben & Jerry’s, and Sprite. For real.

Then somewhere between 4.5 and 5 months I woke up one morning with a bump. A certifiable, visible to the public, baby bump. My pants would no longer button and my suit jacket wouldn’t close. Thankfully I could go without the jacket, but pants? Not wearing pants to work is generally frowned upon, unless you’re a in a specialty line of work. I used a hair time to keep my pants together and wore the longest shirt I could find. I probably spend the majority of that day with my zipper down and didn’t realize it. As soon as I left work I went and bought my first pair of maternity pants.

At first everyone told me that I made a such a cute pregnant woman. That it was “all in my belly” and “you don’t even look pregnant from behind”. I begged to differ, but compliments are nice. Then as I grew the comments were more like “are you having twins?” and “you must be due any second!”

No and no. But thanks.

I remember putting my cocoa butter on every day and simultaneously praying/thanking for no stretch marks.

In those last 4 months of my first pregnancy I gained almost sixty pounds.

The majority of that weight came on in just the last month. Bringing with it stretch marks that made my belly look like it’d been mauled by a tiger. They were long and purple and deep and they hurt like hell.To make the area formerly known as my sexy stomach even more of a crime scene, the scar tissue from my naval ring got hard and turned a poop shade of brown.

On the day I went into labor with Samantha I was 218 pounds.

In the 10th hour of labor or so, with no drugs.
She was 9 pounds and 9 ounces at birth.

Dare I say perfection? I dare.

When I hobbled out of left the hospital, I was somewhere in the 180s and determined to get my body back. Two weeks postpartum I started walking with Sam. At first I was only doing a couple blocks, then after my mom bought me an encouraging new pair of sneakers I started building up little by little. Eventually we got up to 7 miles each trip.

I started to get bored and craved a little alone time. Ken and I agreed that I would get an hour a day at the gym. I did 30-60 minutes on the elliptical and ran/walk depending on how much my knee could take.

When I went back to work after my 6 weeks of maternity leave I decided I would bike rather than drive. Never you mind that it was 8.5 miles one way and I hadn’t ridden a bike in well over 5 years. I was going to do it. Dammit.

I used Ken’s old bike, after replacing it with a super cushiony seat [hemorrhoids say what?]. I packed my work clothes, breakfast and lunch in a backpack and loaded my iPod. On good days the ride was about 30 minutes. By the time I got to work I was sweaty and my face was beat red, but I felt good.

I rode to and from work, then if time allowed, before Ken had to leave, I would also go to the gym. In the afternoon we did our walks. Whenever Sam was playing on the floor I would get down and do endless crunches. When she was restless, I would put her in the carrier and do lunges up and down the hallway.

The last of the baby weight?

I was down to a few pounds less than before I was pregnant and things were fitting.

I don’t know that I’d ever felt so good in my life.

I was proud of myself.

And I was confident. Mostly.

With my clothes on you’d never guess I’d had a baby. But without? I couldn’t even look at myself in the mirror. My stomach was deflated. The skin was loose and droopy. You know when you have a bunch of helium balloons that you forgot about and they start to loose air, getting those little wrinkles? That’s what my stomach looked like. I think Jess describes it best when she compared the postpartum belly to raw bread dough. Believe me, it is every bit as appetizing.

I tried everything. Cocoa butter. Vitamins. Drinking gallons of water. Bio Oil. Mederma. Nothing worked. Not even a little bit. I toy around with the idea of a tummy tuck, but won’t seriously think about it until I know that I am done fulfilling my duties as resident baby grower.

Angus is SO not impressed.

Until then I’ll continue to remind myself that Sam was more than worth it. I mean, I got a beautiful baby, and all it cost me was the skin from my midsection. 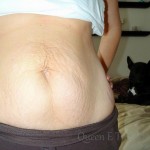 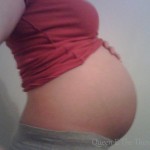 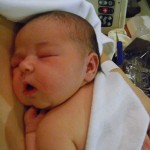 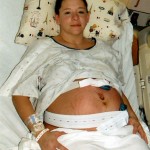