It started after the winter of 2009 when I was 18, I had made some very poor choices that year, endured physically abusive relationships. I was very depressed and self loathing. Then I weighed 190, at 5’ 4” I was considered overweight. I was going through a really rough time in my life and I truly hated myself. All through 2010, I turned to food to ease the pain that I felt. I would just eat and eat and kept putting on the pounds like nobody’s business. I thought that if I made myself ugly enough no man would want me, I thought that all men were pigs and I hated them all. I had always been proud that I had no stretch marks on my stomach but that changed in 2010, big ugly red welts sprang up on my love handles and they kept growing. I also began drinking heavily to dull the pain. I slept with my boyfriend for the first time on April 28th, 2010 on his birthday and I was truly quite drunk. Before that we had just been best friends but we had always said “I love you” to each other and I had known he had a crush on me for years but I thought I was too good for him (I feel like such a bitch looking back on this, if I had just dated him 4 years ago I could have saved myself so much pain and heartbreak and abuse). I weighed the most in January of 2011 at 220 pounds, considered obese. I had stretch marks everywhere! On my arms, my sides, by my belly button, the top of my thighs, my inner thighs, the back of my calves. I hated what I saw in the mirror. But I had a strange sense of satisfaction too, that this blanket of fat was my defense mechanism, that I would never be objectified again.

I was with my boyfriend at the time and he said that he loved my body even with all the stretch marks and cottage cheese which really surprised me, I think this is because he had always liked me (even though when we met I was a small 180). I began to come to terms with my self hatred, I realized that I didn’t want to be fat my whole life and who cares if guys looked at me again because I was with one guy and didn’t care what the others thought. I was tired of being fat, I wanted to be thin. In February 2011 I developed an eating disorder; I would work out for two hours a day and eat less than 1400 calories. I would get cranky and upset if I didn’t get to work out. I remember living off protein shakes and one day I didn’t eat at all. I was happy with my boyfriend but I still hated my body, now for the extra fat and the marks. I self medicated with marijuana, living in the moment, trying to forget the past, feeling that constant hunger. I dropped weight and fast. At first I was ecstatic because I had never lost more than ten pounds in my entire life. I worked very hard, spending hours on the elliptical and drinking gallons of water a day. I lost 50 pounds by June 2011 but my goal was an 85 pound weight loss to get back to what I was in 2006. In my obsessed state I even considered a 100 pound weight loss. I loved the compliments about how thin I was looking and how much weight I had lost, I was now 170 pounds. I was so proud to boast a 50 pound weight loss by the end of May 2011. But it was never enough, never enough weight loss, never enough pot to make me truly happy. I was so unhealthy; my hair fell out in clumps. I was starting to get a receding hair line from my starvation. I loved the smallness that I felt but I hated the loose skin and the marks that still remained even though they faded to silvery scars. What I hated most was the bags on my arms, I always envied the arms of skinny girls, how small and shapely they were. I baked in the sun because it made my stretch marks seem less noticeable, I lived in the gym. When I wasn’t at the gym or at work I was getting high with my boyfriend. I still don’t know how I could have worked out and smoke a pack a day.

I had stopped taking my birth control in January because it didn’t work well, I couldn’t stand the side effects. I thought every month that I was pregnant, and honestly I don’t know how it took so long, probably the starvation mixed with all the smoking. Anyways, I found out I was pregnant on July 25th 2011 when I was 7 weeks. That very day I gave up smoking. Cold turkey and I haven’t had a cigarette since! I’m so proud of myself not just for me but for the beautiful baby girl growing inside me. I truly believe that she saved my life! My little angel, I was on such a path of self destruction but she gave me focus and purpose. I stopped starving and I stopped self medicating. For the first time in two years I was sober for an extended period of time. I felt such trepidation about what the future might hold but I also was able to see through the fog of addiction finally and confront the problems of my past. I turned to faith when the bad memories overwhelmed me. I turned to faith when the addiction taunted and gnawed at me. And I was able to overcome! Because I knew that it was not just about me anymore, it was also about the beautiful baby that was growing inside me, she needed me to be the best that I could be.

In the end, I’m glad that the doctors said something, they were only doing their job, it’s better to be safe than sorry. And I’m glad that I got the amnio done because now I can enjoy the rest of my pregnancy without having to worry if baby girl will be okay or not. I’m so grateful that she is but nothing could stop me from loving her either way! She is my angel and I’m proud to say that even though she wasn’t planned or expected she saved my life. She gave me purpose, before I was a pot smoking procrastinator and now I’m taking the steps that I need to take with the goal of going to medical school and becoming a doctor. She gave me this direction and this purpose. I can’t wait to meet the sweet little kicker that has been keeping me up at night. Thank you for saving my life, baby! 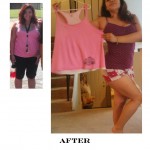 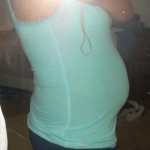 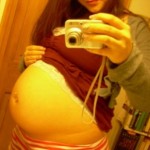 Previous post: My Body is Alive and Ever-Changing (Tessa)