Here I am. Almost six months after the birth of my second daughter. Complete with stretch marks, sagging skin, extra weight, and everything just…misplaced, for lack of a better word.

I had two babies in less than two years, my second being rather large. To say I got stretch marks is an understatement. I have been drenched in stretch marks! I remember when I was pregnant with my first daughter and the stretch marks starting popping up, and the weight piled on. As ashamed as I almost am to admit this, I was sad and upset. I remember crying as I was trying on maternity clothes, thinking about how my body would never be the same. By the end of the pregnancy my entire abdomen, hips and thighs were covered in stretch marks, despite every effort by me, covering myself in every cream and body lotion I could find. Nothing worked. I was just predisposed to get these things. By the time my second daughter came along the stretch marks had faded. But she, being her strong-willed and determined self, added her own marks. While my first daughter decorated my stomach (now nicknamed her “old apartment” by my husband) with mostly vertical stripes, my second was much more creative. She added horizontal lines, squiggly lines, and extended the vertical ones even higher. She was much larger than my first daughter, so the saggy skin was greatly intensified. I would look in the mirror at my post baby body and cringe. I would think, how on Earth could my husband EVER find this attractive?!! But, oddly enough, he somehow does.

Something happened recently that has entirely changed my outlook on my body, my flaws, and my “ruined” abdomen. This story is very sad, but I wanted to share it because it was been so inspirational to me.

On Christmas Eve, 2010 my twin sister found out that she was pregnant. I remember her calling me just minutes after the two lines appeared on the pregnancy test. She was excited, and scared, and a little in shock, as most newly pregnant women are. Her pregnancy progressed well. Everything was fine and uneventful. I remember the day that she got her first stretch mark. She called to tell me about it, and she was EXCITED! She was actually HAPPY about it! She said that that stretch mark showed that her baby was growing. That was the most important thing to her. She was not upset in the least. She was thrilled that her pregnancy was progressing, and that her baby was getting bigger. She had been having premonitions that something wasn’t quite right, and that her baby wasn’t big enough. Everyone, her doctors included, assured her that everything was fine. To her, that stretch mark was just more reassurance that her baby was, in fact, growing.

Tragically and suddenly, at almost 37 weeks pregnant, my sister lost her baby. The details are incredibly sad, so I won’t share them all. She had to deliver her baby and say goodbye. It was, without a doubt, one of hardest things I can ever imagine someone having to go through. After she had been released from the hospital, and was sent home, she was telling me how her abdomen had shrunk down so much. How strange that felt…that her pregnant belly was gone, and she was left feeling completely empty. She said that she still had just that one stretch mark. I asked her if it made things harder to look at it. She said no. She said that her one stretch mark would always be proof that her baby existed. Those words stuck with me, and will stay with me forever.

Now I look at my stretch marks and saggy, floppy skin quite a bit differently. I was BLESSED with the opportunity to carry my babies full term. I had healthy, full term pregnancies, and I was rewarded with two, big babies. Sadly, so many women aren’t this fortunate, which I’ve now seen firsthand. I’ve realized that the sacrifice of my more youthful and skinnier body has been more than worth it.

My sister’s pregnancy was the only time she was given with her baby. I know that she will remember and truly cherish the memories of every kick, every hiccup, every elbow jab. Now I feel that because I was lucky enough to bring my babies home, feed my babies, cuddle with my babies, and raise my babies, the last thing I should do is complain about my less than perfect mid-section.

When I look in the mirror now, do I think my body is pretty, or attractive? No, definitely not. But this body has been through a lot in the past two and half years. Two births in 23 months, a combined weight gain of over 70 lbs, 18+ months of breastfeeding. It takes its toll, and I am grateful for all of it. I’m PROUD of what my body has done and, most importantly, what it has given me. My pregnancies were, by far, the most exciting times of my life. I often miss the moments of pure excitement and anticipation. I miss rubbing my pregnant belly, and bonding with my baby before she was even born. Both pregnancies were such specials times that I will always look back on with so much fondness.

My little niece, who I was never lucky enough to meet, and my incredibly amazing sister have taught me so much and inspired so many, and I wanted to share this story with you. These stretch marks are here to stay, and that’s fine with me. 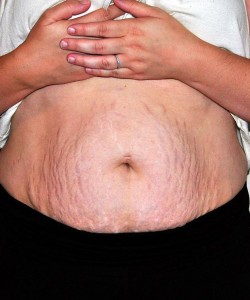