I am 23 years old, and I had my son, Andy, a month before my 19th birthday. Before I had Andy, I was a consistent size 8-10, but had finallyyyy gotten down to a size 6 after some hard work and pure accident. I was extremely happy with how I looked, my stomach looked great! I was toned, healthy, and just very satisfied (which I have never been with my body). I refused to wear pants that went anywhere other than my hips, and I showed it off as much as I could. I was proud of what I had accomplished and was finally satisfied with myself.
Then I found out I was pregnant.

Obviously, it wasn’t planned. I was only 18 at the time! Everything changed. I suffered from hyperemesis for the first 4 months. I was in and out of the hospital for severe dehydration, I couldn’t even keep water down and my kidney’s weren’t keeping up (my body has never handled estrogen well). By the time it finally went away, I had actually lost about 10 pounds and I looked horrible. I was extremely thin and almost skeletal.

That all changed quick!

I ate ALOT trying to gain back the weight I had lost being so sick. I craved snickers and McDonald’s french fries all the time (thankfully not together). I was 110lbs. going into my 4th and 5th month. I was 175lbs. when I delivered my son. I had gained OVER 60lbs. in 3-4 months. I tried to be consistent with lotions and cocoa butter and anything that was said to help prevent stretch marks. But, I got too big too fast and there was nothing I could do, especially considering how small I was from being sick. My skin didn’t just stretch; my doctor says it actually ripped a few layers underneath. Despite my rapid realization that I would never be the same, Andy was 8 lbs. 9 oz. and 21 1/2 in. long. and I was instantly in love!

I lost 20 lbs. right out of the hospital, but was stuck at 150 for 3 years. I had lost all of the progress I had made pre-Andy, and I had just moved to a new place to be with his father and had no one around to help. I was 19, and trying to play wife and mother and everything in between. I had no time for me, I was stressed and I was in over my head. I was depressed, and my weight did not help. I tried to go to the gym, but my then husband wasn’t exactly reliable to watch our son and would straight out refuse if he was too tired or too engrossed in his video games. Even though half of the reason I thought I looked so horrible was because of his comments such as “you really need to go to the gym” “You really need to lose the baby weight soon” “(Insert name)’s wife has already lost all of her weight, why haven’t you done something yet?” Obviously, my favorite hip-huggers were not an option.

Not long after, my son was diagnosed with Autism. So, now I was a 20 year old single mother of an autistic child. I think we all know I was even deeper over my head than before. Thankfully, I adjusted easily. Therapy, evaluations, conferences, seminars, etc. I dove head first trying to make sure I could help him along as best as I could and give him the best opportunity to do well. Through the stress and the constant dead run I seemed to be on, I did lose weight. Slowly, but it did happen. By the time of his third birthday, I was the same weight I was pre-Andy.

Funny thing is, I almost wish I had of kept it.

I am now a size 6 again. Sometimes a 4, depending on the style and cut of clothes. The problem is I still can’t wear the majority of my old favorites anymore. I may have lost the weight, but because I got so big, my skin did not retain it’s elasticity. Plus, because of the ripping in the sub dermal layers, there is a small build up of scar tissue that I can’t get rid of. So, I have excess skin and scar tissue that just hangs over anything that doesn’t come up almost to my belly button (if not over). I had never had this issue before, and it is the most frustrating thing in the world.

My boyfriend (who is both amazing with my son and is the best thing that has ever happened to me) tells me all the time that I am beautiful and perfect the way I am. That no one really looks like they did when they were teenagers and that I should be happy with the way I look. “You had a baby!” he says “of course you’re going to have stretch marks and a little extra! You still look great and I’m still more attracted to you every day.” I want to believe all of that, and he has been trying to pound it into my head for a year. But all I can see if me trying on a pair of jeans, and having them fit great everywhere (legs, butt, hips, etc.) and then noticing the extra hanging over the front, not because they don’t fit but because that skin refuses to spring back. It’s frustrating, it’s depressing, embarrassing…

But I will probably never get rid of it. And that’s life.

I am four and a half years post-pregnancy, and I am still slowly coming to terms with the fact that I am stuck with this body now, and I will never look like I did at 18. I will always have my battle scars (no one is actually sure if the skin will repair itself that deep), and I refuse to get surgery to remove the extra (you aren’t supposed to have more children afterwards, and I don’t want to limit that decision when I’m still so young). I don’t know if anyone really ever fully comes to terms with what they look like after having a baby, but I get more confident every day. My boyfriend is constantly telling me I am gorgeous, and little by little I start to believe it. I finally broke down and bought a bikini last year, and I rocked it like I was 16 again. I am happier to have my son and watch him grow everyday and know that I made him than I ever was in my favorite hip huggers.

And isn’t that what life is supposed to be about? 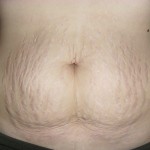 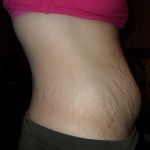 Previous post: Only my partner could love this… before, during and after. (Terri)