My Battle With Guilt (Anonymous)

I met my boyfriend in high school, freshman year. We were officially a couple a little over three years ago. I think we may have used a condom for the first couple months and gradually I started to let him not wear one, being stupid, young, and in love. Well miraculously, it took me years to get pregnant (wasn’t trying) and I was a couple months before turning 18. My mom was already okay with our relationship considering we were together for so long, and finally took it seriously, basically letting us live together for the last couple years. So, she wasn’t so in shock when I got pregnant around 18.

I suffered a terrible amount of guilt and was considering abortion. I knew the fact that my diet was complete shit, that I was smoking marijuana, cigarettes, getting wasted all the time wasn’t good for the baby. I had heard that women start cleansing their bodies in preparation to getting pregnant, and was very scared. I was having pelvic pains, so after the doctor confirmed I was pregnant, I was taken in for an ultrasound. I found I was 8 weeks pregnant. The heart was already beating, and instantly I knew I never could have an abortion. Hearing her heart beat was the more beautiful music I had ever heard in my life.

So here I am, 39 weeks and ready to pop any day. But, about 18 weeks in I come in for a routine ultrasound, and they had discovered a mass somewhere in her abdomen. Never in my life was I so frightened. I come to find out after trips to UCLA, that this was a CCAM/Pulmonary Sequestration. It is a rare mass that occurs in the lung, and in her case was so large it was pushing her heart completely to the right side. They had advised me to “terminate” the pregnancy. I knew there was no way in hell I would. I remember sitting in the office listening to these doctors tell me in detail about her mass, during the fetal heart echos, and 2hr long ultrasounds, and all I could think was why? Here I am 18 years old, changing my whole life around, becoming a mother so young, dealing with this shocking news I was responsible for another life and NOW I’m hearing not only is there complications, but a very rare one, that is known very little of.

Around 23 weeks I moved to a different state. My boyfriend came with, and I continued care with a new OB in one of the best hospitals in the US, because of the insurance my stepdad was able to give my daughter great care and a fighting chance. Although, when I had come up here I knew they had little hope for my daughter. Long story short, I was told she will me immediately taken from birth to the NICU for her care, and that there was a chance she can come out not even being able to breathe. And that even if she was healthier than ever, she still needed to be transferred to the NICU to run tests, and determine when her surgeries will be. (surgery is necessary, it’s not an if it’s when)

So, with all this on my mind, I have a tremendous amount of guilt. I feel that what I did before I was pregnant, and when I was pregnant but didn’t know I was, the things I was doing somehow caused this to happen to her. I was told it wasn’t, that it is genetic, but I am scared it was my fault. On top of this, I’m 18 years old, 239 lbs, and looking my absolute worst.

I gained weight previous to the pregnancy. I blew up in about 2 years, going from 145 to 190. After being pregnant I shot up to 239 lbs. I am 5’7, went from 36DD to 40E, and I have stretch marks all over my body. From my sides, my hips, one or two on my butt, and all the way up my belly. I hate my body. I feel miserable. I wear the same black long sleeve maternity shirt every other day, the other day is a dark grey long sleeve maternity shirt, and sweat pants. I used to dye my hair consistently because I hated my natural hair color, I used to do mystic tanning because I am naturally pale, I used to wear fake nails, etc. All which I cannot do anymore and it actually does bother me. And I feel terrible for worrying about such stupid and vain things while I should be focusing on what’s happening with my daughter and be thankful that she has made it this far. I’m constantly comparing myself obsessively to other 18 year olds, perfect slim bodies, belly pierced, no stretch marks, perky breasts, able to show it off comfortably any time they want. I’m jealous. And obsessive. And it’s on my mind constantly. I love my daughter with my whole heart, she has become my whole world, and I haven’t even met her yet. But I hate my body. And I am so scared I will never lose the weight, nor the stretch marks, and that my body will never be the same. And I knew this is wrong. 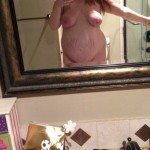 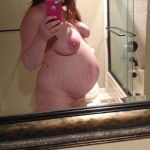 Next post: Mother of 8 Wants to Say, “Aloha!” (Anonymous)

Previous post: Listen to SOAM on the radio TODAY!