I went to Comic Con and this is what I learned

Well, I did not actually go to the Con itself because passes are expensive and next to impossible to get even if I could afford it. But as the Con overflows the convention center more and more each year, all of Downtown San Diego winds up hosting a ton of free events so I went for those.

What does Comic Con have to do with postpartum body image? Nothing. But also a lot. As I participated in events and met various cosplayers (AND MISHA COLLINS YOU GUYS), I had some thoughts that extend beyond the Con and into Life in general. 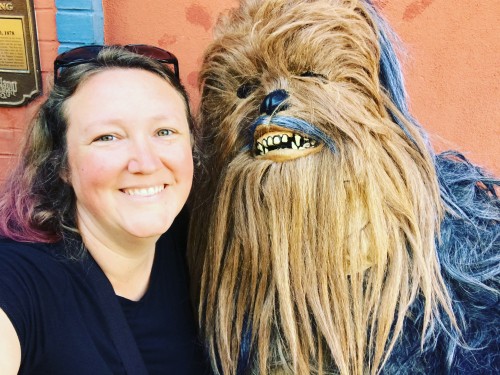 Chewbacca teaches me a Life Lesson.

1. Take photos. I am struggling to feel cute these days. I could list my various physical imperfections, but that only reinforces them so I’ll suffice it to say that I just feel uncute lately and I struggle to remind myself that A) I totally am cute no matter what and B) it doesn’t really matter anyway because I’m valuable no matter what I look like on the outside. So I tried to avoid photos at first, taking pictures of the cosplayers themselves or of my son. But one Chewbacca was all, “hang on, hang on” and walked right up to me to do a selfie together. And he (she?) was right. I deserve to be in pictures, too. And I owe it to my children. I want them to have photos of me enjoying life when they are older. I want to show them how to enjoy life, and take pictures, even if they aren’t always feeling cute. It’s important. And so what if I don’t look like a model in every picture? My friends think I’m lovely as is. And the photo is recording a moment more than just the way I look. It’s recording a memory, a feeling. So don’t shy away from photos. Jump in! 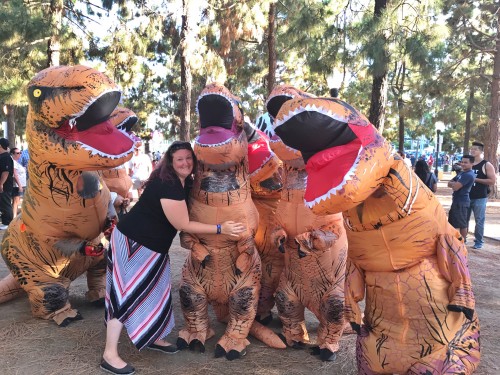 Look at this memory being made: ME AND DINOSAURS. Best day ever, basically.

2. Be a cooperative force in the world. I decided to spend three hours of my life waiting to get in to the Netflix Experience (yes, I am one of those people) and they wound up closing the doors about fifteen people in front of me. It was frustrating but I won’t go into that here. The people in line behind me, a mother and her daughter, had had the same thing happen to them two nights before. The girl was almost 11 and loved Stranger Things. I told them that if they wanted to close the doors right after me, I’d make sure the kid got in instead. It made them feel good. After we were turned away, Netflix started handing things out to the crowd and while many people pushed and knocked their way forward, one lady made sure the kid behind me in line got a poster. It made me so happy to see people working to make this one kid’s day a little less disappointing.

The day before, my kids and I did a scavenger hunt for Amazon’s new Tick series where we had to find clues to catch the bad guys. They reminded us that it was a competition and we should try to keep our answers hidden from the others in the room with us. And I just couldn’t help thinking that we’d probably catch more bad guys faster if we all cooperated instead of raced.

Those instances reminded me of a post I shared on Facebook a few days ago. About how we’re all good moms no matter the choices we make for our families. It feels so much better to lift each other up, to help each other out, than it does to push people out of our way while we race to the finish line (or the Funko giveaway, depending). And we get so much farther if we cooperate. Women are pitted against each other enough. Let’s decide together to put down our defenses, to put away our defensiveness, and just wholly be there for each other without tearing each other down. Imagine what we could do together in the world if we decided to be teammates instead of see each other as contestants we have to beat. We’d be unstoppable. 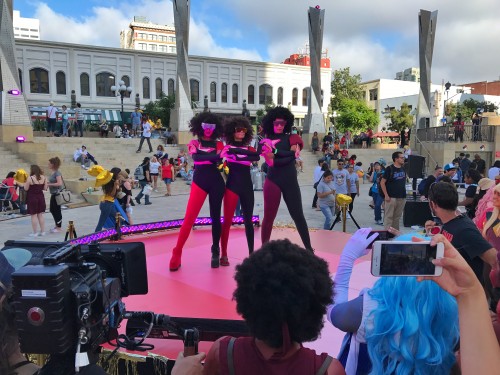 In the evening, my son and I went to the filming of the Steven Universe video for Stronger Than You. If you haven’t watched Steven Universe, I cannot recommend it enough. It’s a show about love, and growth, and finding your true self. The song says, “I am made of love and it’s stronger than you” and I think that’s an excellent way to see the world. Love requires more than one person and together we are stronger than just one. Love is stronger than you, but it’s not competing with you. It’s just a fact: together, with love, we are stronger.

We are made of love and it’s stronger than you.

Love to you all. 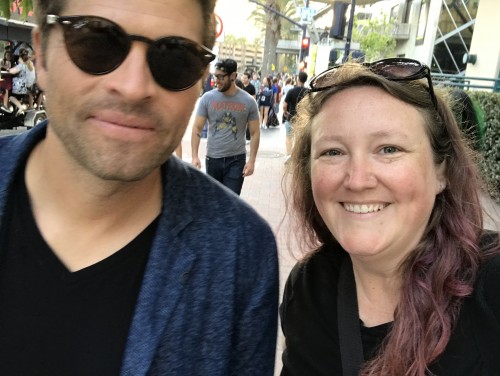 I am not even kidding about the Misha Collins part.