A Hard Road, but Worth Every Second (Anonymous)

I have struggled with an eating disorder in various forms since I was 15, and cannot remember a time when I didn’t feel fat. During a period of relative sanity I had my son, at 19 (maybe that’s not very sane, in retrospect). The pregnancy was great and he is a wonderful nearly-8-year-old, but after… I was huge. And by huge I mean a size 8… Yeesh. I was actually a bit chubby- I’m a tiny person by nature, I’m a size 2 and have been eating normally for almost 3 years- but at 5’2 I’m healthy. Anyway, after I had my son I had about a 5 year blur or starving, binging, and purging- which was something I had never done before. I lost a job because of it (apparently eating disorders are terribly obvious to medical personnel; nursing work might have been a dumb idea…), and at one point I almost lost my husband, who I have been with since I was 15. One morning in early 2007, I physically could not get out of bed. I had purged ANYTHING I ate for an entire week prior- no nutrition at all for 7 days. I decided I HAD to stop, because being an invalid was not what I had set out to do… 2 months or so later, I got my period back… and the next month I became pregnant with my daughter. I was thrilled and terrified. I HAD to eat normally, I couldn’t live with myself if harmed my baby! And so I did. I had terrible morning sickness, and couldn’t wait for 12 weeks to come around. But twelve weeks got here and it only got worse. I’m not sure I went one day without vomiting. In some strange Irony, the one time I was TRYING to keep everything down, I couldn’t! At that time, I had a part time, weekend job at a music store where, aside from the owner, I was the only employee. At 15 weeks, I was going about my duties when I got sick. Nothing too unusual. So I tried to drink some water to settle my poor tummy.. and couldn’t stop throwing up. I had to call the store owner, close the store, and wait for my best friend to come pick me up- no way I could drive, my husband was on a job about 2 hours away. I get to the hospital, where I am just vomiting spit. They wouldn’t listen to anything I said. ‘Are you bleeding’ noooo… ‘we think you have a tubal pregnancy’ but Im 15 weeks- something would have ruptured long ago if that were true. ‘I’m pretty sure you aren’t 15 weeks’ JUST DO A FREAKIN’ ULTRASOUND ALREADY!!! all the while I’m STILL puking! finally, they do the ultrasound, and what do ya’ know, I’m right. No tubal pregnancy- just a perfectly healthy, squirmy 15 week old fetus. They gave me some IV fluids and anti-emetics, and sent me on my way, assuring me I was having a ‘rough pregnancy’ and this probably wouldn’t happen again. I was still puking nearly daily, but I was ok, save for my hubby’s birthday when we found out her sex, went out for a celebratory dinner where I destroyed the bathroom… It was tolerable for a few more weeks when I had a repeat of the ER incident, at least this time they gave me prescriptions for anti-emetics and painkillers. About 3 weeks before she was born, it happened again, only my Promethazine had stopped working and they had to give me some sort of cocktail of drugs normally given to people with cancer. I apparently had NO immune system left after all this and developed the worst bronchitis ever. Between the puking and coughing there were times I thought I might die and almost didn’t care. I have never felt that awful before or since. While I was waiting on my prescription to be filled, I went into labor. AT THE STORE! The Dr. knew my last labor was 4 hours, so I was scheduled to be induced… the next day! I didn’t have a phone with me, so I drove home. We drove like crazy and 15 minutes after we got to the hospital I was holding the sweetest baby girl! Suffice it to say, I have had no desire to vomit since then, and I have been eating normally ever since. She just turned 2 and is giving me kisses as I write this. I have never been happier!!!

Pictures:
both my sweet babies
the finished product!
me at 7 months- I never made it into maternity pants
me today- still small, but not skeletal! 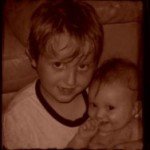 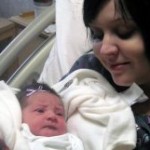 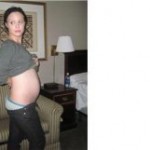