I found out I was pregnant at 18. I was actually thrilled, even though the father and I had only been together for a short three months. I had a wonderful beginning to my pregnancy. I loved watching my belly grow, and eating whatever I felt like. (I always did anyways.) I was 120 lbs before pregnancy, and I gained exactly 35 lbs on the day of delivery. I’m now back at 128, not bad, but I’d like to lose more. At 21 weeks of pregnancy, something I had never considered a possibility, happened. My daughter was diagnosed with a congenital heart defect. Actually, three. She has a single ventricle defect, luckily she has the right ventricle, which does most of the work, and is way easier to remedy than hypo-plastic left heart syndrome. Also, transposed arteries, meaning the two major arteries are reversed. And lastly, she has two large holes in her right ventricle, which are actually blessings in disguise. They keep the arteries open. She’s the strongest most beautiful person I’ve ever met. I am very blessed to have her, and I know this. She has beaten every odd the doctors thought she wouldn’t. I just wish I could be half as proud of the body she left me with as I am of her. I wish I would have known that the body I had before pregnancy was beautiful, and taken advantage of that. And as soon as I started to feel that my pregnant body was beautiful, my pregnancy became overwhelmingly stressful. After a long 36 hours of labor after being induced, she was born c-section. I got to see my Ava Elaine for about 30 seconds before they whisked her away to the NICU. She’s had her first of three surgeries, the next right around the corner, and she’s doing amazing! The pictures shown below are of me at almost 4 months postpartum. As you can see, I have an umbilical hernia, and I’ve had it since birth. I will be having surgery to fix that soon, and hope it helps the shape of my tummy a little. Right now it looks like a deformed brain. 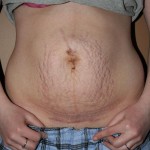 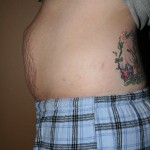 Next post: Thankful and Blessed but Still Trying to Accept (mummyoftwodarlings)

Previous post: STRUGGLING with looking pregnant a year AFTER I had my baby (Anonymous)