Age: 32
Number of pregnancies: Second pregnancy, 33 weeks along at time of writing this. First child is 27 months.

The last time I updated, I had just found out I was pregnant with baby #2. Now I am thrilled to say that I’m 33 weeks along with my second daughter. As you’ll see, I’ve been blessed with another big beautiful belly. Just like with my first daughter, I have no stretch marks (so far) and I’m carrying all in front of me. Asides from the “look” of it though, it’s actually been a very different pregnancy . This time around, I’ve had it pretty tough. I’ve had a lot of morning sickness (which I didn’t have the first time) and I’ve been dealing with a bad case of SPD (symphysis pubis dysunction) which has kept from being as active as I would have liked. My anemia has gotten a lot worse and I’ve found out that my body doesn’t absorb Vitamin B12(not pregnancy related) and I’ll have to get injections for the rest of my life. Throw in a 2 year old to take care of and a home daycare to run, and I’ve been pretty tired and in a lot of pain.

But even though I’m exhausted and ready for this pregnancy to be over, I’m not losing sight of how fortunate I am to have been giving the chance to experience motherhood a second time and I’m especially excited to have been given another precious baby girl. I’ve tried to really enjoy every single moment and be in tuned with the changes in my body despite everything because we don’t plan on having any more children. I honestly haven’t given too much thoughts on my postpartum body, I figure I’ll have enough time to worry about that later. For the moment being, I just want to cherish my baby’s healthy movements and enjoy my last weeks of being a mother of one before chaos sets in. :) All I know is that having to “run” after kids all day must have kept me somewhat in shape because I’ve only gained 17 pounds so far which I think is pretty good. Hopefully I’ll manage to stay under 25 pounds.

I still read your entries and constantly get inspired and touched by them and I promise I’ll keep you posted when this little one is born. Cheers mamas!

The pictures were taken at 33 weeks. Hard to imagine I’ll get even bigger. 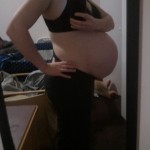 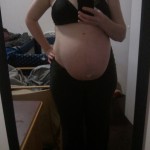 Previous post: Learning to be Proud of My Body (Rach)