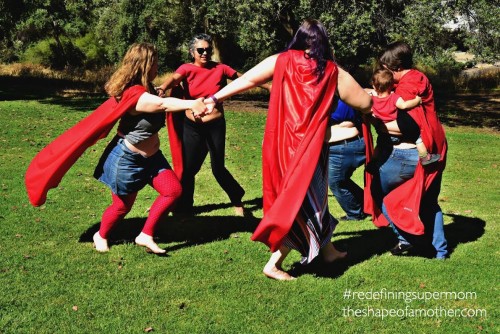 When my daughter was born fifteen years ago, I was utterly unprepared for the extent of physical changes that would come along with the pregnancy. Afterwards, I felt torn between the awe and pride I should have been feeling for what my body did, and the shame I actually felt for looking nothing like the pictures I saw in magazines. I assumed I was the only one dealing with this so I kept it to myself for a long time. And then one day, almost four years later, I happened to catch a glimpse of another mom’s belly and in that instant I knew this was actually a totally normal thing. It was such a relief to be able to let go of that self-hate I had spent so much time focused on and I wanted to make that knowledge available for women worldwide. I wanted everyone – mothers, women who aren’t mothers, and men – to know mama bodies are normal. So I started The Shape of a Mother. It’s been over a decade now and I’ve published the stories of about 2,500 moms in that time. Here are the top five things I’ve learned working with women and body image.

1. We’re harder on ourselves than on anyone else. Probably the most common comment people leave on the submissions that are posted is something like Wow! You’re my body twin! But you look way better than I do! Logically, if two people look that much alike, we can assume they probably both look equally lovely. And, certainly, if you saw two friends of yours who looked alike, you would think that neither was more beautiful than the other, right? But when it comes to ourselves, we are far more critical.

I have learned to handle this in my own head by changing my internal conversation. I pretend that I am talking to a friend, or that a wise friend is talking to me. Suddenly the words I think to myself are much kinder and over time it has made a huge difference in how I feel about myself.

2. What seems like a curse to some is a longed-for blessing to others. There are women who would do anything to be able to have their body blemished by pregnancy. Some women are struggling with infertility, others with miscarriage. There are mamas who have had stillborn babies and who wished there was some stretch mark or loose skin or something to mark the fact that they became a mother.

This isn’t a competition for who has it worse and I don’t intend to make it seem that way, but it can be helpful to remember to keep your own worries in perspective. It can remind you to find beauty and wonder in what you do have. Your own worries are valid whether or not they are “lesser” than another’s.

It is an important life skill to be able to hold in your heart both the validity of your own feelings as well as your place on the spectrum of privilege. In other words: it is legitimate to lament your stretch marks, but keep in mind how blessed you are to have them.

3. There is no one right answer. There is no one right body shape and size. There seems to always be competition between moms (or women in general, really). One mom’s body doesn’t change too much after pregnancy. A second mom’s does, but she works very hard at eating a certain way and exercising a certain amount and she finds that her body eventually looks the way it did before. A third mom might be dealing with health issues that prevent her from exercising the way the second mom does, or she might be dealing with financial issues that prevent her from eating the way the second mom does and the result is that her body remains changed. Yet another mom might find that she simply prefers not to exercise or to be careful about her diet and that the way her body changed doesn’t bother her. And, of course, there are the moms who do all the things and their bodies still remain changed, at least in some way.

All too often, we forget that the world is diverse and we see it only through our circumstances. It is helpful to eliminate judgment entirely and simply listen and offer support. Instead of saying, “You just need to work harder at making time!” Try to say, “You don’t have time to exercise? I know how busy you are! And you look beautiful as is!” No need to argue about details, just lift each other up. Trust that what other people say about their experiences is true for them, even if it isn’t for you.

4. Language is important. You might notice I try to phrase things carefully. I say “bodies that don’t change after pregnancy” instead of “bounced back” or “got her body back”. And I say “and you look beautiful” instead of “but you look beautiful.” Because words carry more meaning than just their dictionary definitions. We hear what people say to us through the tone of their voices and their expressions, but also through our own histories. By choosing words carefully you can avoid alienating someone or creating animosity in your relationship. By choosing words carefully, you can show compassion and let someone know they can trust you; in turn, maybe you can trust them back.

5. When we are brave enough to share a secret fear, we open the door to empowerment. That’s the crux of SOAM. I kept my fears secret for so long because I was afraid of being judged, but when I finally got brave enough to mention it to my friends, they joined the conversation in relief. I opened SOAM officially on July 5, 2006, and I asked my friends to share the link. I was worried it would fall flat on its face, but the world was full of isolated women, thirsty to know they weren’t alone. The website exploded and just over a month later I was getting calls from media giants like the London Guardian. In that month, I saw the face of the world changed – just a little, but changed nevertheless. Because the women who submitted their pictures to me were brave enough to do so. Coming together to talk about the scary things is one of the most powerful things we can do as humans.

Working with SOAM has changed my life completely. It’s given me an unexpected career I never could have dreamed up on my own, and it’s taught me compassion, perspective, understanding, kindness, and how to be brave. I hope, in turn, I can share these gifts with the world.

Next post: I went to Comic Con and this is what I learned