Will I ever feel beautiful? (Catherine’s Mommy)

I’ve read some wonderful stories about finding yourself beautiful AGAIN. But what do you do if you’ve never felt beautiful. I started feeling terrible about the way I looked at age 5. My father who was very mentally and physically abusive always said, “You are too ugly and useless to ever find someone to love you.” My whole life I’ve been mistreated by men. I’ve never been respected and there for have never really loved myself. Not once have I ever looked in the mirror and thought, “I look pretty today.” When I was 19, just 2 years ago, I married the guy I dated from the 2nd week of 10th grade. He cheated on me from day one, but every time I thought about leaving he said he loved me and I stayed. I knew I didn’t love him, but just not being alone was enough for me. Right after we married the physical abuse started and I stayed for awhile after that. I figured I deserved it and wouldn’t find any better. After all that’s what he told me. He would say,” You’re fat, ugly, and useless. No one else would ever want you. You’re used goods.” So I stayed with him for 3 months after we got married. Until I went to work one day and some of the guys I worked with saw a choke mark on my neck. They told me I was moving out that night. They helped me move out while my ex was at work aka at his girlfriend’s house.

I moved back home and 9 months later I found an old friend on myspace and we started talking. My friend and I were raised as practically family. His aunt was my mom’s best friend for about 16 years. When I found him I immediately planned a trip to see him. Even though we hadn’t seen each other in 6 years, because he was in the Air Force something was just telling me I needed to see him. Even though it was an 8 hr drive I had to do it. I visited him March 27th, 2009 and we’ve been in love every since. On July 25th, 2009 we started trying to have a baby knowing we were getting married August 8th. He was so cute about it. He even got on the computer and made out our baby making calendar. He had figured out my ovulation schedule and told me which days we could and shouldn’t have sex. We married on August 8th, 2009 and exactly one week later we found out I was pregnant. I knew about 3 months prior to our ultrasound that we were having a baby girl. Our little Catherine filled my dreams every night(the little that I slept). I was scared we were having a girl. I’m even more scared now that she’s here. I don’t want my daughter to feel the way I do. I want her to love herself and see herself as beautiful. How am I supposed to teach her to love herself when I can’t love myself. I have the most amazing husband in the world. He loves me unconditionally. He still finds me attractive,and he tells me all the time how beautiful I am. Unfortunately I just don’t see how he thinks that. I’m so lost at what to do. How do you decide to love yourself and the way you look? 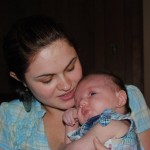 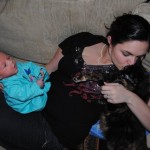