My body has been though alot in this past year, Dec 19th 2008 i found out i was pregnant i started to gain weight right away and knew it something wasnt right i wasnt suppost to have a gut at a month and a half!!, at 6 weeks i went in and there were 2 tiny little heartbeats on the screen, we were having twins!! we were so excited but 4 weeks later i had heavy bleeding and clotting and miscarried the babies, after i lost the twins the weight i put on just never went away, Charlie took it really hard and said he didnt want to try for any more kids for a few more years, i went back on my nuvaring and we started used spermicide to prevent another pregnancy, but April of 2009 i my period didnt come, and took a test and it came up saying “pregnant” i couldnt believe it to be honest,It wasnt the right time, it was right before charlie deployed and we honestly were at the verge of calling it quits, My (ex)husband Charlie wanted me to have a abortion and since i wouldnt we have decided to get divorced and are now legally seperated and the divorce will be final in november, he wants nothing to do with his daughter. But back to this pregnancy, I had severe hyperemesis for the first 5 months of my pregnancy i was admitted 4 times, had over 40 IVs in, at my worst i was down 27 lbs from my prepregnancy weight, i was taking about 15 pills a day just to be able to fuction. But at 23 weeks along the hyperemesis just went away, and i have gained 20 lbs since, (still down 7 from pregnancy weight) but my daughter is a healthy baby girl and is due december 19th, which is the one year mark from when i found out i was pregnant with her siblings, its pretty bittersweet that her due date marks that day. i have 2 light purple stretch marks and my timer has popped, my breasts went from a 32DD to now a 32G so i think about 5 lbs of my weight gain is in my boobs,they have gotten quiet saggy since i found out i was pregnant i was scheuduled to get a breast reduction in june and that is on standby until i stop breastfeeding, but it will still be done!

~Your Age: 19
~Number of pregnancies and births: 2nd pregnancy, 2 angel babies and 1 still in the womb

on my photos first one is prepregnancy, second is 21 weeks suffering from hyperemesis, 3rd and 4th are at 27 weeks pregnant. 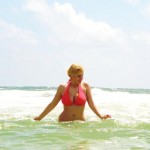 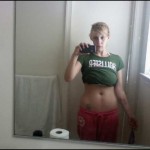 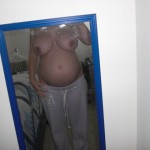