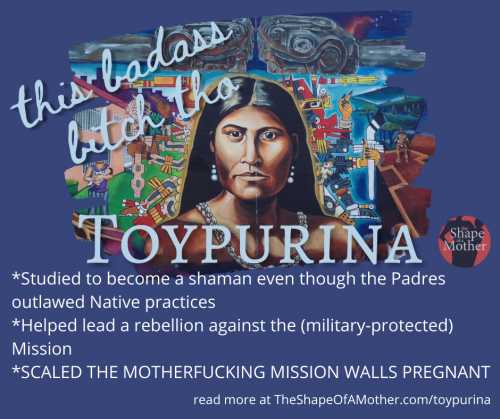 Because it is Native American Heritage Month, and because this week the United States celebrates colonization via our Thanksgiving holiday, I wanted to learn and share about an Indigenous Badass Bitch. My googling immediately led me to Toypurina who will not disappoint you, I think.

This story takes place about 150 years after the story of the Plymouth Rock Pilgrims, and on the opposite coast, but colonization is the backbone of each story. Padre Junipero Serra, the man credited with founding the missions, was canonized as recently as 2015 despite protests focusing on the slavery, disease, torture, and abuses he and his fellow padres inflicted on the Native folx. Growing up in California we spend fourth grade learning about (and often building replicas of) the missions here. We are not taught the darkest parts of that history (possibly in part because at least some of the missions – certainly the one here in San Diego – are still in use as Catholic churches). It is also probably really important to note that the missions were not benign and pacifist churches, but military forts. The Spanish began building them up the coast less to “bring salvation” to the Native Americans, and more to make a note to Tsarist Russia that California was claimed. In my research on Toypurina, I came across an informational page on the California Missions website and it was mostly accurate, but rather grossly erroneous in a few points that certainly don’t shine well on this fierce warrior. Typical. I won’t link to it. I just wanted to touch on this history briefly before I go on.

And now I shall go on:

So. Toypurina (pronounce it toy-purr-eena). This badass bitch was born around 1760 in what is today known as the Greater Los Angeles area. Her people and other local peoples were lumped together as “Gabrielinos” by the padres, despite coming from different communities. Toypurina was born into the Kumivit tribe, known today, along with other local tribal communities, as the Tongva. Her father was a medicine man for her tribe and she was brought up from a very young age to be a shaman herself. Her training as a shaman included being multilingual to communicate with other tribes, as well as a language reserved only for shamans (1). Furthermore, as a spiritual leader, she held considerable social power, which gave her access to tribal leaders (1). When the padres came, they began to outlaw traditional Native practices, punishing them with whippings or canings. But Toypurina didn’t give a shit; she continued studying to become a medicine woman anyway. The woman had no fear. Badass.

So these padres come when she’s around 10 or 11 years old and build Mission San Gabriel Arcángel on Kumivit land and begin draining it of resources while also tempting the now-displaced Indigenous folx with blankets and food. Those who came to live and work at the missions were not allowed to leave and were made to work and often forcibly baptized as well. In addition to the aforementioned physical punishments, the Native women were often abused or even raped.

The Mission drew not only the Kumivit, but Indigenous folx from other areas as well. These folx not only fell to the toxic slavery behind the promises of a better life, but also were displacing the Kumivit and other local tribes and complicating the balance of resources and politics.

Toypurina was not thrilled with any of this, of course, but as the padres began to outlaw more and more of Indigenous life, she became active in social justice movements designed to fight for her people’s right to their land and lives.

And when the padres outlawed the Kumivit’s traditional dances, such as that to honor their dead, the Kumivit were

The traditional story of Toypurina is rife with mythology. She was badass, she was brave af, but she was not the singular mastermind at the center of the plot to attack the Mission. Most scholars believe that was an Indigenous man living in the Mission named Nicolás José. Nevertheless, Toypurina and her brother were very involved and went to local villages and rallied folx to help them. Toypurina’s role and importance in the revolt came down to her shamanistic training: she was to immobilize the padres with her spiritual skills, while the warriors took their land back.

So the raid happened. All these dudes and Toypurina scaled the walls of the Mission to the attack.

Take *that* archaic ideas about what the pregnant body can or cannot handle. She was in just the right “condition” to fight for her unborn child’s right to an Indigenous life. FUCK YEAH PARENTS EVERYWHERE!

Sadly, the raid failed as soon as it began.

A Spanish soldier had overheard some of the rebels planning the attack. Knowing some of the Tongva language, he was able to alert the Mission which lay in wait for Toypurina and the rest of the rebellion.

Most were able to escape but Toypurina and 19 others were captured. 17 were let go with only public whippings but Toypurina, Nicolás José, and third leader named Temejasaquichí were eligible for execution. At the trial, Toypurina spoke, saying that she was furious with the padres for what they had done to her land, her culture, her life. There is a brief speech often attributed to her in court, but in reality, “the soldier who recorded her testimony documented only that ‘she was angry with the Padres and with all of those of [the] Mission because [they were] living here in her land'” (2).

No one knows what her intentions or actual beliefs may have been, but Toypurina survived her death sentence by converting to Catholicism and getting baptized as Regina Josefa (they chose the name for her, and perhaps the name Regina was meant as a cruel joke since the word means “queen”). A few years later she married a Spanish soldier and had three more children.

She lived for fourteen years after the rebellion, dying at age 39 of disease.

I cannot begin to write a more eloquent closure to the story of Toypurina than Maria John did in her KCET piece:

The ongoing significance of Toypurina’s story in particular clearly does not end with the foiled rebellion, nor even with her banishment from her traditional homelands. Rather, her life’s story in its entirety reflects a narrative of resilience, survival, and a persistent will to adapt to difficult circumstances. Toypurina emerges from the historical record as a woman who not only confronted Spanish colonialism in Southern California, but who also lit a path for the survival and the endurance of her people. Herein lies the continuing significance of her memory and her legend for the present day communities who claim her. . . .

Take some time this week to remember Toypurina, her people, and all the other Indigenous folx of the Americas who have been spending the last several hundred years trying to survive. If you are having Thanksgiving this week (zoom style of course, with Coronavirus exploding across the country), tell someone about Toypurina.