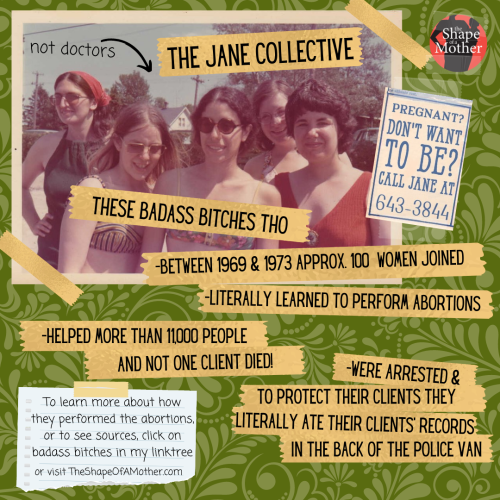 I was born in 1978, five years after Roe v. Wade. Hell, it was only four years after the Equal Credit Opportunity Act of 1974 which finally guaranteed women the right to their own credit. My life was shaped in these ways and so, so many more by the women who came before me. Suffragists, yes. But also those who fought for our rights during the Women’s Liberation Movement of the 1960s and 1970s, sometimes called the second wave of feminism (the first wave was the suffrage movement).

It’s easy to forget how lucky I am to benefit from the fighting these women did because all the changes they brought about feel so normal today, so expected. (And I’m not forgetting how far we still have to go! Which is WAY too fucking far.) The Women’s Lib movement fought for many things: free childcare (they didn’t win every battle, unfortunately), equal pay, freedom from sexual harassment, and, of course, to legalize abortions. It is important to understand that before Roe v. Wade provided federal legality for abortions, some states allowed it and others did not.

In light of the frightening backslide happening across the United States in recent years, and in the wake of this new law in Texas, let’s talk about Jane.

In 1967, college student Heather Booth got a phone call from a friend who’s sister needed an abortion. “I was told she was nearly suicidal,” Heather recalled, “I viewed it not as breaking the law but as acting on the Golden Rule. Someone was in anguish, and I tried to help her (6).” So she made some phone calls and found a doctor willing to perform an abortion. And then two weeks later, Heather got another call – word was spreading. It was then that she decided to create a more anonymous system. 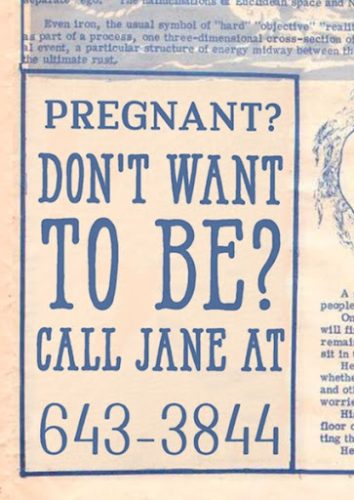 People in need of abortions would call the number and quite literally ask for “Jane.” At first the group was working with doctors, but when they found out that at least one of them wasn’t a doctor after all, the reasoned that they, too, could learn to perform the procedure safely, and for a more reasonable price. The “doctor” had charged up to $1,000 for the procedure ($6,500 today adjusted for inflation), but the Janes only charged $100 or less if the client could not afford even that (1). These badass bitches were here for the human rights, not for their bank accounts. *heart eyes emoji*

Judith Arcana, another Jane, explained how they learned the procedure: “Ultimately one really good abortionist taught Janes how to do abortions with skill and care. And then those Janes taught other Janes (2).”

And they were all aware that the work was risky. According to Heather, “. . .Three people discussing an abortion in those days was a conspiracy to commit felony murder (2).” Judith noted, “All of us were always aware that what we were doing was illegal, that we could go to jail. You might have to throw everything into a bag and run down the back stairs at any moment. But we understood that it was important work, useful work, necessary work (2).”

Y’all, this whole thing is like a movie. Clients would be counseled at one location – the Janes were always very honest and up front about the fact that they were not doctors (3) – and the procedure itself would be performed at a second location that clients were driven to, sometimes blindfolded (1). 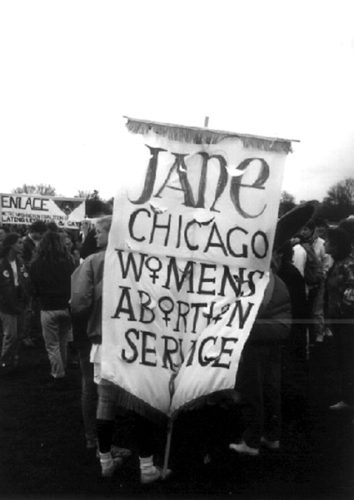 In 1930, 2,700 people died as a result of abortions. And that is just the number that is recorded; it is estimated that many more likely died without the cause of death being recorded properly (3). Even today, 7 million people are admitted to hospitals in developing nations as a result of illegal abortions (4). It is vitally important to understand that the rate of people seeking abortions is virtually the same in countries where abortion is outlawed as it is where abortion is legal (5). In short: the work the Janes were doing was vitally important.

But that signifies how incredibly necessary this was. These people would have found a way to get an abortion, anyway. The Janes were doing what they could to make that as safe and as validating as possible.

In the more than 11,000 abortions these women performed during the Jane years, not one of their clients died. Some did have complications, including needing hysterectomies, but a doctor who agreed to do follow-up visits for clients of the Janes noted that they “had a safety rate roughly the same as that of the legal clinics then operating in New York (6).”

As for how they performed the abortions themselves, Judith remembers that they used a “paste” from Canada that dilated the cervix and induced miscarriage. When the paste was not available, they would dilate the cervix enough to break the amniotic sac, pushing on the belly to try to get all the fluid out and cause the uterus to miscarry. They would then send their patients to the doctor to report a miscarriage, not telling the whole story, of course (8). 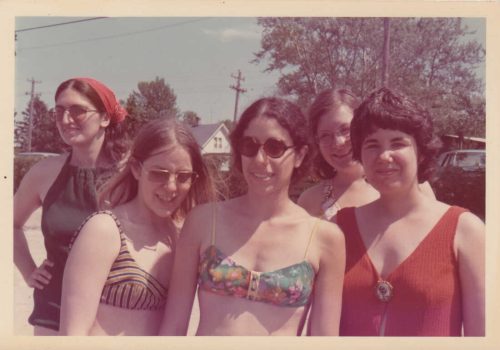 Formed in 1965, Jane was an underground network in Chicago that counseled and helped women who wanted to have abortions. (From left) Martha Scott, Jeanne Galatzer-Levy, Abby Parisers, Sheila Smith and Madeline Schwenk were among the seven members of Jane arrested in 1972. There were roughly 100 volunteers at Jane.

For quite a few years, the Chicago police tolerated Jane. Rumors suggested it was because the family members of the police needed abortion services, too (well to do people will always have access to abortions) (9). But that could not be relied upon forever and one day the shit hit the fan. In May of 1972, Chicago police raided two locations simultaneously and arrested seven Janes.

Okay but my favorite part of the police raid story is that these homicide detectives came in, arrested a bunch of women, and were so confused because they had expected to find a male doctor and they just could not believe that just a bunch of students and homemakers could be performing the abortions themselves (9). They kept asking “where is he?” Lol there be no “he” here, sirs.

Y’all. These badass bitches were so dedicated to the safety of their clients, that while they were in the back of the police van, they tore up the index cards that had client information on it and ate them (6). Like. Tell me this scene isn’t worthy of a movie. It totally is.

Luckily Roe v. Wade was on the horizon and SCOTUS was expected to make abortion federally legal. The Janes’ lawyer employed tactics to delay their case and on January 22, 1973, it happened and the case against the Janes was dropped, and the organization disbanded (7).

Y’all. We are headed back there. States across the US are enacting stricter and stricter abortion laws and many are waiting for our now conservative-majority Supreme Court to agree or disagree. If and when they reverse Roe v. Wade, we’re gonna be fucked.

I don’t want to have to learn how to perform abortions, for fucks sake. We cannot fucking go back. Ever.

Let these women inspire us and lead us if god forbid the worst happens. These badass bitches did what they had to and they did it well.