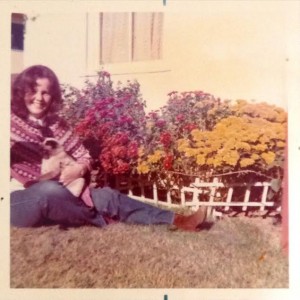 My mom died almost four years ago. She had a lifetime of problems (that is probably a gross understatement) and she was a very broken person. Ours was a complicated relationship (also a gross understatement). At the time I brought all her journals, notes, letters – every paper that had helped to define her as a human – home and tried to order them as best I could chronologically into a box. This summer I’ve been working hard on a book about her that I’ve intended to write for at least a decade. It is simultaneously exhilarating and exhausting work that is helping to heal my own psyche and that I hope will someday play a role in the healing of others.

The point being that I’ve been absent here because I’ve spent this last week living in the letters of the past.

I’ve brought out the box of documents to find quotes and fill in the blanks for me as I write her story down. I’ve scanned everything relevant and, as a child of a hoarder, tossed everything that didn’t matter anymore. I discovered some interesting things.

My mother never believed she was worthy to be human. She came barreling into the world loud and feisty and those weren’t qualities admired in children in the 1950’s. She tried to fit into the box society held for her – a different sort of shape for a woman, but one that is just as important to us as our physical shapes. If we spend our lives wishing we were a different shape, either inside or out, we forget to find the beauty in who we already are.

In the box I also found a 36-page (single-spaced) letter that my grandmother had written to her aunt detailing her 1958 divorce. On the first page she wrote, “I’ve heard so often how crazy I am, just like my mother and my grandmother, that perhaps I can believe it myself.” And I realized that we have a long family history of trying to figure out where our sanity lies in relation to our own mothers. I spend my life various amounts of afraid that I will lose it like my mom did, or that I will hurt people like she hurt me.

As young women and wives, they didn’t know their own value, constantly putting it aside for the words of another. Their notes and letters indicate that they slowly began to realize that they are allowed to take up space in this world and that this partly had to do with raising daughters.

As we parent our children, we reparent ourselves. Searching to protect our babies from that which hurt us the most, to fill the holes we need filled. We see our babies and want them to know from birth that they are worthy and are allowed to exist, just as they are, in this world. And, slowly, we begin to make those connections for ourselves as well.

So I’ve been thinking this week:
~To remember that anger is just as valuable an emotion as serenity. Anger gets shit done and we need shit to get done.
~That we are all beautiful, and our different gifts come together to make up this whole world that, if we allowed it to work properly, would function in harmony as we each employed our own talents.
~That it is a part of parenting to reparent ourselves.
~That we all walk the heroine’s journey in our lives, learning who we are as we go. And that it can be a lifelong process. And that that is okay.

And hopefully I’ll be back to regular Feminist Fridays next week.

in My Own Ramblings, News

Next post: Come to Accept the New Me (Anonymous)

Previous post: My Fiancé is Looking Down On Us (Anonymous)