She Was Worth it All (Amanda)

Number of pregnancies: 3
Number of births: 2
Age of children: 14 months

I was 16 years old the first time I got pregnant, and I was petrified. I didn’t know what to do, or who to turn to, and my boyfriend made it quite clear that abortion was the only logical choice. He told me having a baby would ruin our lives, and that our families would be so disappointed in us. I knew he was right, I knew I was too young, and I knew my parents would be devastated, so I did it. Part of what drove me to my decision was fear because I had no one to talk to, but a big part was him, if he couldn’t support me in keeping our baby, I just didn’t feel as though I could do it. I was 11 weeks and 4 days the day of my procedure, on August 3, 2006, and my due date was February 18, 2007.

Two years later after my boyfriend and I had just moved into our first place together, I found out I was pregnant again. We were both working, supporting ourselves 100% financially, but that didn’t make it any less terrifying. When I told him he was extremely upset and pushed for abortion, again. But I told him no, I just couldn’t put myself through that a second time, there was no way, so I told him if he didn’t like my decision he could leave. The next thing I knew he was packing up all of his stuff, and then he left.

Once he left I questioned whether or not I should really go through with having a baby, because at that point in time I thought for sure I’d be doing it alone. After a few weeks of living with his mom though, she managed to talk some sense into him, and he came back home. Things were still not easy between us though, he was angry and distant, and I was scared, and because of everything going on between us only a few people knew until I was about 18 weeks. At that point in my pregnancy he finally decided to come around, and even started showing some excitement, but then everything took a turn for the worst.

At our 20 week ultrasound on October 9, 2008, we were told that our baby did not have a heart beat, and that because of the position the baby was laying in, they couldn’t tell us the sex, either. I was heartbroken, and my world felt like it came crashing down. I didn’t know what to do with myself, I didn’t know what there was left to live for. Two days later I was induced into labor, and after 8 hours I delivered my baby by myself because no one made it into my room in time. When the nurse finally came, she told us it was a little boy, and she cut his cord, wrapped him up, and handed him to us. We got to hold him for 12 hours before we had to let them take him away, and that was truly the hardest part, just watching that nurse walk out of the room with him, knowing we’d never see him again. We named him Liam, and he was born on October 12, 2008, at 20 weeks and 2 days, weighing 10oz and measuring 7.5in long.

16 months later I found out that once again, I was pregnant. I really wanted to be excited this time, but right away I started having a lot of spotting and cramping. I went to the ER twice, and both times they told me it was a threatened miscarriage, so I expected the worst. I was heartbroken all over again, and it felt like I would never get to have a baby. But despite all the spotting, my little baby held on, and we later found out via ultrasound that I had partial placenta previa and a subchorionic hemorrhage which was the cause of all the problems. They both resolved by themselves though, and in the end I was able to have my natural birth that I’d always wanted. My little Amelia was born on November 17, 2010, at 40 weeks and 1 day, weighing 8lbs 3oz and measuring 21in long. She is my everything. (We picked the name Amelia Mae because it has Liam’s name in the middle of it).

During my pregnancy with my daughter I didn’t get a single stretch mark until I hit 37 weeks, when she very noticeably dropped. I wanted to cry when I first saw them, but they’ve faded a lot since having her, so I don’t mind them as much now. Luckily none of them were too deep, and most of them were below my belly button.

The first picture below is from when I was actually in labor, I wanted to get one last belly shot lol. The other two are from today, at 14 months post partum 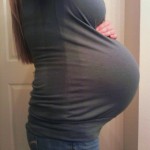 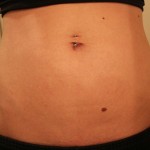 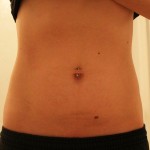