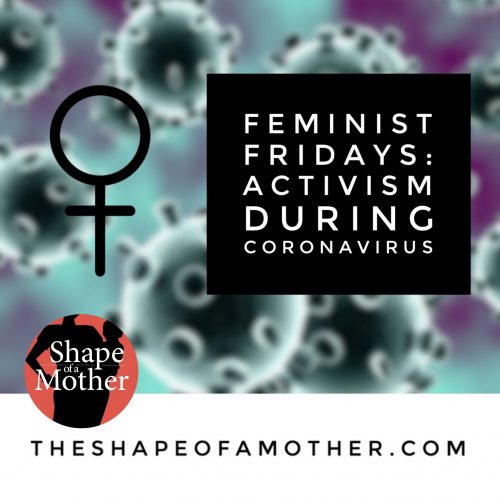 Today, I’m going to basically just plagiarize an email that my former Women’s Studies professor sent this week in the college newsletter. The links explore how this disease is affecting different communities, and how society is responding to that. Do you have anything to add?

~This New York Times article about how Coronavirus has shed light on inequalities among students in college.
~”You can’t pick strawberries over Zoom.” This LA Times article examines the inequities facing those who are still picking our food for us. Overwhelmingly Latinx, many undocumented and therefore lacking access to medical care, these people cannot stop working or we will all starve. These people are not being cared for and they are literally our access to survival. Be aware. Vote for changes.

~This one is SO IMPORTANT. People with disabilities are one of the most invisible marginalized groups. This article lays out why some of these decisions being made in regards to the effects Coronavirus is having on our society are harmful to people with disabilities. PLEASE read this one and pass it on.

~This article at Common Dreams is long and complex but very good, so grab your cup of coffee. It lays out how and why women do more work in society and how this pandemic will put even more pressure on women than men during this time.
~And this article from The Atlantic talks about the racial disparity during this crisis. This is an issue that’s getting some attention, if you pay attention. Trevor Noah did a bit on the Daily Show and I’ve seen tweets from Black Americans pointing out that it is less safe (and at times frankly disallowed!) for Black people to wear masks – they are more likely to be seen as a threat and to be a target for mistaken violence by police.

My former professor also shared this article about radical healing from Psychology Today. It’s an excellent read and I hope you choose to, but if you can’t for lack of time or ability to deal with the sheer overwhelm, here’s a summary:

1. Educate yourself and share information about the impact of COVID-19.
2. Nurture your spirituality and practice self-compassion.
3. Stay connected and increase emotional intimacy.
4. Cultivate cultural understanding and curiosity.
5. Take action to address racism and inequities related to COVID-19 and to promote health for all.

I will be back next week to talk about how not to miss out on life during this pandemic. Stay safe, my readers. 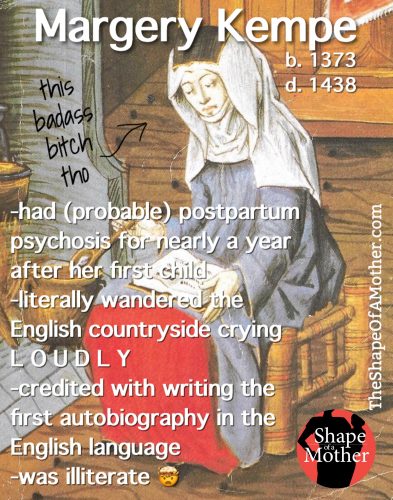 You are going to think, “wtf, Bonnie? why this bitch?” And my answer is this: for the past few months, I have been in the darkest place in my life. I have spent weeks crying, unable to stop at all. Driving to and from my kids’ schools and appointments, shopping for groceries, anything, tears running down my face 24/7. I keep Margery Kempe in my heart for times like that. She walked across the country, wailing loudly and obnoxiously, but never hiding herself. She kept showing up to the work she felt called to do, despite the constant tears. She is my archetype, my goddess, patron saint of depression, mental illness. I invoke her in my darkest times for strength and spiritual fuel to keep going, despite the tears. I want to share her with anyone else who needs her.

Margery was ordinary. This is one of her most remarkable features, according to scholars. For many centuries since her life and death, we knew almost nothing about her. It was only in the 1930’s that her book was discovered in an ancient family collection somewhere in England. She’s remarkable because she’s middle class and her book gives a rare account on the life of middle class medieval women. Her father was notable in their small town, even serving in leadership roles. She married when she was about 20 to a man who seems by all accounts to have been as kind as any medieval man could be (specifics on that later).

After the birth of her first child, Margery had what was probably postpartum psychosis, having visual and auditory hallucinations of demons commanding her to harm herself. This lasted for nearly a year until she had a vision of Jesus which saved her from a suicide attempt and began a lifelong series of visions and voices.

This changed her life and she wanted to become as holy as possible but faced some obstacles. For one thing, she was married, so her ideal celibate life was out of the question. In the middle ages – particularly for a woman so devoted to the Church – husbands had the right to sex regardless of whether their wives wanted it. Margery was wholly sold into this concept; constructs can be powerful af. She speaks of her husband with love and without blame. He treated her (mostly) tenderly and compassionately, and followed her throughout many of her travels. He stood with her through adversity whenever he could (he struggled with debilitating social anxiety). At least fourteen children and many years down the line, he finally consented to a celibate marriage. Obviously this is super complex to our modern minds and I want to make it clear that I am in no way excusing rape for any reason; rather, I am simply relating her story as she has written it herself.

So anyway, this bitch struggled in other ways, too. She owned and ran two businesses for a time (a brewery and a mill), but they both failed (beer went flat and horses refused to pull) – she attributed the failures to not following God’s will for her life; her employees just thought she was cursed. Eventually, she began to take pilgrimages instead.

This chick was one highly sensitive person (actually, as I was reading her autobiography, I repeatedly recognized neurodivergence in her). Her understanding of Jesus’ life and death was too much for her and she’d cry when she thought about it, which was almost always. And she cried L O U D L Y okay? People, as a rule, did not like this bitch (that’s often the hallmark of one of the best bitches). In fact, when she traveled to the Holy Land, her companions repeatedly tried to ditch her and leave her to travel utterly alone. In England, she was arrested and put on trial more than once for heresy, but she was never convicted.

Why? Because this bitch was SMART. She was not literate – most weren’t at that time – but she knew her scripture and could hold her own against the most scholarly priest. She had knowledge of other religious texts as well. I mean *I* have auditory processing issues, but even so I cannot imagine just hearing something and knowing it well enough to debate it. Impressive!

And that is how she came to be the first author of an English language* autobiography. Not a man, not a scholar, not a poet: just an ordinary, illiterate, middle class woman. Talk about a badass bitch, am I right?

Truth be told, reading her autobiography became tedious at times. She gave a *lot* of dialogue between herself and Jesus (or Mary or God himself… an occasional angel, you know) and I skimmed all that. And even back in the middle ages, she was too “Jesusy” for many of her peers – including the ones who were literally on a pilgrimage to the Holy Land – so if that isn’t your thing, hers might not be the book for you. But as a historical figure – as an archetype – she is vital to me, a badass bitch who cries, um, kind of a lot.

Margery Kempe inspires me to be unabashedly myself, no matter what that looks like. Sometimes it’s easy to be myself. I am funny and smart and empathetic. But I am also angry and emotional and wild, and I’m ashamed of those things sometimes (maybe more often than sometimes). Margery Kempe is the goddess I invoke when I need to find love for my uglier bits. I hope some of you find comfort in her, too.

If you’d like to read her book, you can do so here.

*Technically, she spoke Middle English which is not as closely related to modern English as you might think. You can read her original version here.

Categories: Badass Bitches From History, My Own Ramblings
0 comments 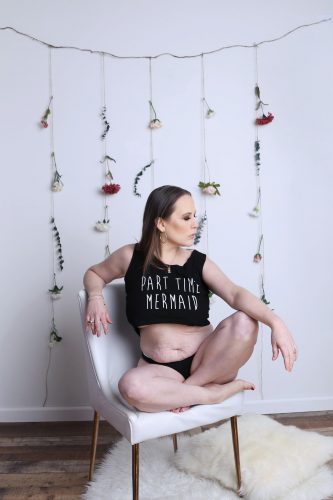