My insecurity about my body turns me into The Hulk (Katrina)

Hi Everyone! I’m new to SOAM. I only discovered the site 2 days ago, and I was already hooked. Reading all of your stories has been an inspiration and a newfound comfort for me to post my own story, here it is…

I’ll start by going back to when my husband and I first met. I was 18 years old, and struggling with money as a college student. At the time I was actually in a same sex relationship, and the only reason I mention that is because if it wasn’t for her having a friend that had a friend that worked at a certain job, I would’ve never met my husband. Its very ironic, I know. Basically, I was looking for easy fast money, and yes, it is what you are all thinking… the friend of a friend was a dancer at a strip club, the club my husband was a manager at. So, I took up the friend’s offer of trying her line of work and became an exotic dancer. When I first started the job I never really noticed my husband. I worked at the club for maybe 6-9 months, and left because I felt like I was better than that. I still continued to be in the same sex relationship for another 2 years, and remained very close to the dancer friend that got me the job. It wasn’t until I was 20 that I went back to the club to get my job back because again I was in need of fast money. It was during that time that my husband and I caught each others attention, and started hanging out. We dated for about a month before my 21st birthday, and during that time he told me he would dream about me, so I was literally the girl of his dreams, and I had surgery on my breasts and he came to take care of me, only weeks after we went on our first date. I think that’s when we knew we were meant for each other. Before I got my boobs done I was a DD, but they were very saggy. I got a lift and implants because I wanted to be my normal size.

Three weeks after my surgery we celebrated my 21st birthday in Vegas, he paid for the room, bought me a dress, and paid for everything, inlcuding the cost of my two friends and his two cousins. After Vegas I felt changed. I was still working at the club, and I started getting that feeling of being better than that again. I would go to work and just sit there, not wanting to talk to any customers, because I didn’t want to make him mad. After a few weeks, I quit.

Ok, so lets fast forward a little bit. We had been together for almost a year, but we were having a lot of problems. He had trust issues because of my previous relationship with the same sex, and my history of having flings with random guys. We were on the verge of breaking up. He confessed to me that he had sex with one of the dancers at the club, a dancer I probably knew, but never found out exactly who it was. It was weeks after that when I found out I was pregnant. Surprisingly he was very excited, and even shouted it out to the whole club. He came over to my parents house to tell them the news, and my mom wasn’t happy at all. She was eating dinner at the table and when we told her she pushed her plate away and said she lost her appetite. After an hour or so of talking, we decided to get married instead of just moving in together right away. So, we got married the day before my 22nd birthday.

I was 14 weeks pregnant when I started feeling really sick, so I made an appointment to see my dr. They couldn’t find the baby’s heartbeat, so they sent me to radiology to have an ultrasound. The dr then told me that the baby’s bowels were formed outside of the body, the defect is called gastroschsis. I didn’t really understand at first, and when I called my husband I was just hysterical. I started seeing a specislaist for high risk pregnancies. We ended up having an amniosentisis, so we got to find out the sex of the baby. I was happy to know it was a girl! At 36 weeks, I was scheduled for a c-section because the specialist said her intestines were very dialted, and if she were to stay in longer she would get an infection. On September 23, 2009 at 8:06am, I gave birth to a 5lbs 9oz baby girl, who we named Kamryn Presley. Since I wasn’t able to go to the NICU to see her the first day, my husband would come and update me on her condition. When she was delivered she swallowed her meconium, so she had a bunch of her poop her in her lungs. I was horrified, because with her defect, plus that, her life was in danger. She was on 100% oxygen, and the docters didn’t think she would make it. She spent 6 months in the hospital, having gone through 4 different surgeries to fix her bowel movements. She came home the weekend of my 23rd birthday, it was the best birthday gift I ever recieved. She’s now 2 1/2, she’ll be 3 in September. She’s been fed by a feeding tube since she’s come home 2 years ago, but she’s slowly starting to eat different things by mouth. We’re hoping she’ll have the feeding tube removed within a year or so. She goes through 4 different therapies throughout the week, but she’s developing very well.

In Novmeber 2010, we found out that we were pregnant again. Also once again, my mom had a negative additude about it. She told me we should have waited until Kamryn was completely better. I just ignored her. We decided to have a lot of screening tests done to make sure this baby was going to be born healthy without any birth defects or medical problems. When I was about 8 months I started having false labor pains, so bad that I went to labor and delivery. The dr. said I was contracting but I wasn’t dialted at all. I spent another whole month very large and pregnant. Finally, in the very early morning on August 24th, I decided it was finally time. I was in labor for about 8 hours, but the pushing took only about 2 hours. I delivered my beautiful, hefty, but healthy baby girl through a successful VBAC at 11:27am. We named her Peyten Abigail, and she weighed in at 8lbs 10oz.

Before my first pregancy I was 5’4 and 125lbs. I gained about 60lbs with Kamryn, so I was about 185 when I had Kamryn. I got down to 154, then I found out I was pregnant again. I gained about 40lbs with Peyten. I was 192lbs when she was born. Now, at 9 months PP, I’m 159. Also, I went from being a DD before and after having surgery on my breasts to being a 34 G today. I would still like to lose another 20lbs. It really does bother me that I can’t lose the weight. I even bought the Zumba DVDS. We ended up going to Vegas for my 25th birthday which was this past March. I did Zumba religously for a whole month before Vegas. I was doing it for about an hour a day, 4 to 5 times a week, and I never saw any results or lost any weight. It made me upset and sad because before I got the DVDS I would watch the infomercials and there was women in their 40s and 50s losing 15 lbs after 10 days. It really ruins my mood because I look in the mirror and I just see a slob. My emotions take over me to the point where I find myself yelling at the girls, mostly Kamryn for every little thing. I know she’s at the age where she wants to get into everything, but she doesn’t deserve to be scolded for little things like touching my phone or playing in my bathroom everyday. I feel like a horrible mother when I yell at her every 5 minutes. My husband works at night most days, and I find myself texting him and letting my anger out on him too. I blame it on my self image. I believe that if I was back in shape, and felt better about myself, I would be a nicer person. I don’t want my kids to grow up thinking I’m a scary person because I yell all the time. I’m horrified to think that when they’re teenagers they’ll tell me that they hate me…

But, enough of the sadness and depression. I’m glad to have found this site because it makes me feel so much better about myself. I would still like to lose the weight, and i’m sure i’ll have blow ups about the way I look time and again, but at least I know i’m not the only one out there that feels that way. I’m also happy that I have two beautiful girls. I guess I can say it was worth the toll on my body, because I wouldn’t change the fact that they’re in my life.

I hope you enjoyed reading my story. God bless all of the mothers out there! 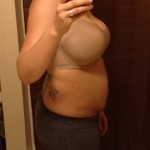 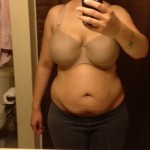