I’m still alive, but we lost our precious daughter. (Maureen)

On Monday evening the 25th of July 2011 I was brought to the hospital by Ambulance, because of serious belly ache. I passed out several times. By the time I arrived in the hospital I was in shock. I was rushed to surgery to get the baby out. The doctors thought of a placental abruption. But in surgery they found out that I had an internal bleeding, I lost about 3.5 liters of blood. At 23.59h our beautiful daughter Chloë was born. The moment she was born she was not breathing, so they helped her to get her breathing right. Her heartbeat was stable.
Later that night Chloë was transferred to a specialized hospital because the doctors worried about her brainactivity as a result of the lack of oxygen.

After surgery I was brought to the Intensive Care, where I was kept asleep and on the respirator. My condition was stable at that time.

Chloë wasn’t doing very well… 2 brainscans showed no activity, this was caused by the lack of oxygen. Probably caused already on Friday when I had some belly ache also. I was doing better and after my condition was stable enough I was able to see my daughter for the first time on wednesday. Later that day we were told that there was nothing the doctors could do for Chloë anymore. On
Thursday they would stop the treatment.

On Thursday 28th of July, Chloë stayed with us the whole day and we could even hold her in our arms. But at 19.00 h the respirator was stopped and at 21.00 h she passed away in my the arms of my husband…
We kept Chloë with us until Sunday, then she was brought to the mortuary. I was doing better and after in total of 4 days of intensive care and 3 days of medicare, I was transferred back to the hospital closer to home on Monday, were I stayed until Thursday.

Together with our family and friends, we said goodbye to our sweet little princess on Saturday the 6th of august when she is cremated.”

We’re so proud to be the mommy and daddy of Chloë, but it hurts we had to let her go after 3 days…
We were so looking forward to have a child to take care of. We love her, we miss her… But she will always be our little girl.

The scar that I have confronts me every day. It’s a negative memory, it reminds me extra that we have lost our baby girl. But it is also a positive memory, as I’m still alive and we have a daughter now, although she is an angel in heaven. Since that scar we are a mommy and daddy. We love you, Chloë. You are our little princess. ? ? ?

I even can’t remember how my belly looks like without the scar, this is now who I am and in a strange way it makes me also that I’m blessed.

It will mean a lot to me if my story will be part of the ‘The shape of a mother’ community. 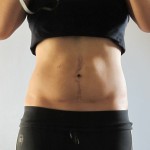 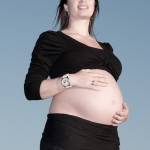